With the Brexit result generally deemed as unfavourable for business and financial markets in many regards, one might have presumed that July could have ended up as a loss-making month for investment portfolios. However, as the graphic below shows, almost all asset classes recorded notable gains on the month.

One might be tempted to put much of this down to the currency effect caused by a weakening Pound (foreign currencies and investments are worth more to the British investor when translated back into Sterling terms after a relative decline in the Pound), but this is not the explanation; the sharp downward adjustment to GBP took place in late June and the Pound was broadly flat over the month of July versus the Dollar, Euro and Yen. 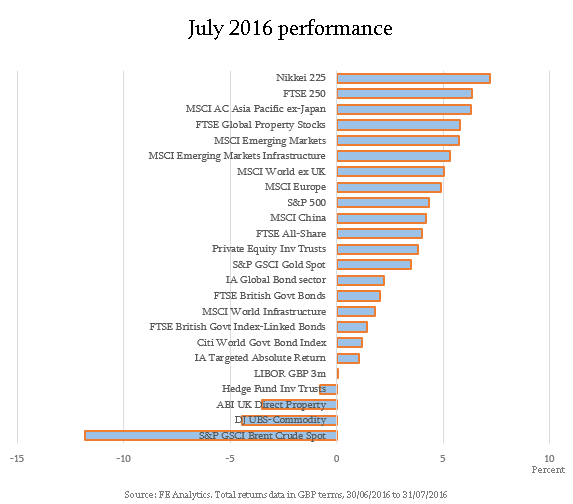 So what could explain the positive performance of most financial assets? There are several possibilities. The first clue is in identifying that the top half of the leader board on the chart above consists exclusively of higher risk assets, mainly in markets and areas of the world that are considered above-average risk (Emerging Markets, Japan, FTSE 250 Mid-Cap companies – albeit the latter arguably oversold immediately after the Brexit announcement).

Markets appear to have unquestionably recovered their risk appetite as Central Banks rushed to the rescue to calm market nerves. The Bank of England cut interest rates to 0.25% in July, while there is a greater perception that the Federal Reserve (the US equivalent of the Bank of England) may not raise interest rates again this year. Many market participants took these policy responses from Central Banks as a near-term signal to buy higher risk assets given the supportive monetary stances of these leading institutions.

Of course, not all asset classes produced positive returns on the month, not least the UK Commercial Property sector. Managers here are still trying to assess the extent to which physical properties must be sold onto the market in order to return monies to investors, whilst trying to avoid “forced sales” as much as is feasible under the circumstances. Such issues are unhelpful in the near-term to those with a longer-term mindset who are content to patiently collect the 5%+ rental yields on offer. Oil prices also retraced, albeit this comes after a near-doubling in crude prices since the lows touched in February, leading many to take profits.

All in all, the events of July go to show that the second and third-order effects within markets are extremely difficult to predict; negative events will yield responses from other participants, with a net result that often appears illogical when only considering the first-round effect (in this case the Brexit result). Furthermore, moments of immense fear are often followed by swift recoveries, catching many off guard.

The chief conclusion from all the above is that trying to “time the market” is a dangerous exercise. Maintaining a long-term investment horizon via a well-diversified portfolio is deemed to be the best course of action for investors if history is anything to go by.

Fiducia Wealth Management Posted in Pensions & Retirement on 02.08.16 Read What are the income options for your pensions?  Deciding what to do with your pension savings is an important step we will...
Next Post