July proved to be a testing month for many financial assets linked to the developing world. Markets were spooked by domestic events in China; the local A-shares stock market endured a significant correction after (unsustainably) posting gains of over 125% in a matter of months beforehand. Although losses fell almost exclusively upon local retail investors engaging in significant speculative activity, local business and consumer confidence inevitably fell back. Fears that a cyclical slowdown in China may weaken near-term economic growth prospects for the region served to put a dampener on global sentiment, particularly in the emerging world. Chinese factory output and trade data disappointed the market, although the Chinese authorities continue to demonstrate their willingness to take significant action, delving into their vast financial reserves as required.

Commodity prices declined by 10% in Sterling terms on the month, as measured by the Dow Jones UBS Commodity Index. Prices weakened in anticipation of a reduction in near-term economic demand combined with increased supply, boosted as commodity producers sought to raise production over the past year to counter the effects of lower prices. WTI Crude Oil prices retreated by around 17% in July, contributing heavily to the decline in the overall commodity basket index. The WTI Crude Oil spot price retraced from $56 to $45 per barrel over the course of the month, encouraged lower as Iranian production threatened to oversupply the market. 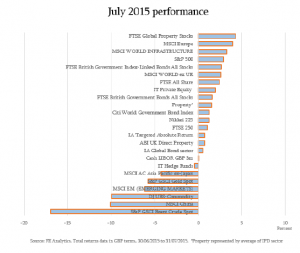 Although such events are undoubtedly negative for the minority of nations that export commodity goods to the rest of the world, cheaper raw materials and other input prices are good news for those on the other side of the table; they provide the equivalent effect of a “tax cut”, leading consumers and producers to benefit from lower costs. Contrasting events in the emerging world, developed market risk assets witnessed positive returns on the month; key Western stock markets typically rose by between 1% and 4%. Europe surged forwards as the threat of a Greek departure from the Euro was resolved for the time being, inviting market participants to buy back assets that had previous sold off in the face of reduced risk appetite during the early part of the summer.

Infrastructure and Property stocks picked themselves back up after a testing couple of months, as markets wagered that interest rate rises may not be as large as previously anticipated. Bond markets have weathered significant volatility in recent months and look set to end the calendar year with negative returns. We remain underweight Fixed Income assets.