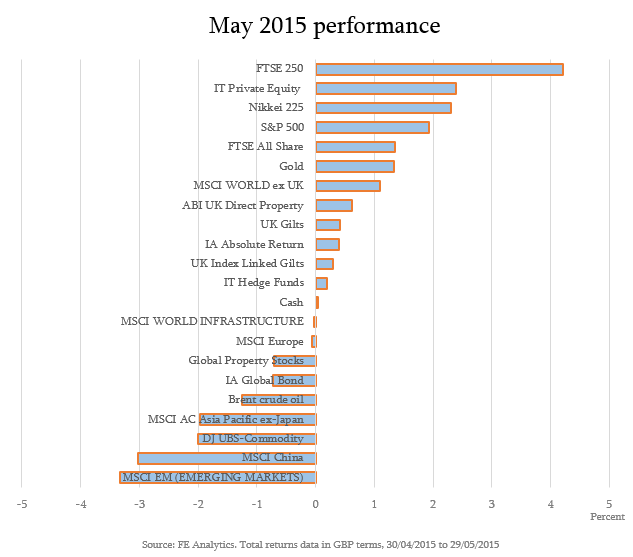 The Conservative Party’s unexpected victory in the UK election led the shares of medium-sized domestic companies to rally strongly in May, as represented by the FTSE 250 index. Concerns surrounding Labour’s anti-business rhetoric and the possibility of an ineffective coalition weighed heavily on UK stocks going into the election, leading shares to trade lower as the risks of a less favourable regulatory environment appeared greater. Financial markets responded positively to the surprise Conservative victory, which was generally perceived to be the most business-friendly outcome.

As a sign of relief, UK homebuilder stocks rallied by over 20% since the election result on ‘mansion taxes’ being struck off the political agenda. Other industry sectors that were previously under pressure, including financial institutions and energy companies, now have the green light to resume forward planning following months of uncertainty. Subsequently, the latest economic survey data from Markit [released end of May] reports business confidence hitting its highest level in nine years as a ‘business as usual’ mentality resumes. The UK consumer might expect to benefit from such trends as the rest of 2015 unfolds; economic data suggests a notable pick-up in wage growth is finally materialising, which, combined with low inflation, looks set to provide a much-welcomed boost to personal finances.

It was not only the UK that experienced positive stock market returns over the month. Many of the world’s key stock market indices also generated attractive returns during May, along with risk assets such as Private Equity. European stocks proved to be the exception; the risks of a Greek default weighed heavily on near-term market sentiment, leading many investors to take profits following the significant outperformance of European stocks during the earlier part of the year. The Japanese stock market has also continued to show progress.

Financial assets that are especially sensitive to interest rate rises, such as Global Bonds, Property Stocks and Infrastructure, have all underperformed global stock markets both year-to-date and during the month of May. In our view, this trend indicates that market participants are starting to anticipate an increase in (US) interest rates fairly soon. Global developed market stocks have surged over the same time period that these ‘bond proxies’ have underperformed, suggesting that the global economy may be in a reasonably comfortable position to weather a small increase in interest rates, providing a positive near-term signal in our view.

The Fiducia portfolios are broadly positioned with this tactical outlook in mind; we have added risk to our higher risk portfolios over the last couple of months, whilst we trimmed our Property Stocks, Commodities and Infrastructure exposure across all of our portfolios.

Mixed economic signals continue to stem from China. With some statistics pointing to economic softening, whilst others suggest the chance of a ‘hard landing’ looks to be reduced compared with prior expectations, not least in the property sector, markets have retreated slightly following outsized gains over the past year. Emerging market stocks and commodities struggled in May, as the impact of a stronger dollar and anticipation of rising US interest rates continue to weigh on expectations. Despite near-term sentiment, we continue to believe that emerging assets are attractively priced for long-term investors.

Fiducia Wealth Management Posted in Investing on 09.06.15 Read Over the next few months we will be writing a series of articles explaining the various asset classes used in the Fiducia...
Next Post