The price of Brent Crude Oil rose by 6% during May (in Sterling terms), taking total cumulative gains to around 50% since oil prices reached multi-year lows during the first couple of months of 2016.

“Black Gold” has certainly made a strong recovery from the oversold levels seen this winter thus far; supply increases, market fears and other technical reasons drove prices to levels that were temporarily inconsistent with the general range of long-run production costs, which we broadly estimate to be between $30 and $50 per barrel.

Many other Commodity prices have also participated in the ‘oil recovery’ of the last four months, suggesting that wider financial market dynamics are in fact at work. The potential for global core inflation figures to pick up in coming months has heightened as a result of the base effect that goes into inflation rate calculations. Other positive macroeconomic factors also point to a potential increase in core inflation rates.

Gold, however, went in the opposite direction on the month, declining in value by around 5%. This was understandable given its safe-haven status; May was generally a “risk-on” month, in which risk assets rather than defensive assets outperformed.

Erratic changes in sentiment have been a consistent feature of markets in 2016 so far; multiple headwinds, economic uncertainty and short-term events have routinely swayed investor confidence in whatever way the wind has blown. High valuations in many areas of the market also do not help. With the British EU Referendum vote impending, markets are likely to maintain their skittish behaviour until further clarity is received. 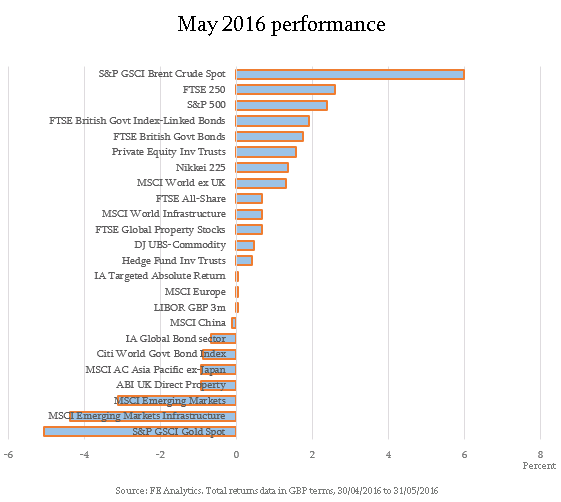 Ironically, the FTSE 250 Index of UK Mid Cap shares (those most exposed to Brexit risk) rallied the hardest of those global stock markets listed above. To elaborate on such paradoxes in markets, the FTSE 250 index and Sterling more generally had actually been underperforming since the autumn of last year in anticipation of Brexit, well before most financial commentators had pencilled June 23rd/24th into their diaries. Consequently, even bad news today can cause financial asset prices to rise if market prices were already one step ahead in factoring in an even worse outcome – it is the change in expectations that can matter most.

British Government Bonds also returned nearly 2% in May, with UK Gilt yields continuing to move lower, reaching levels barely seen in recent British history. Whether or not this represents a move into ‘safe haven’ assets (even if the UK Government itself is at risk from Brexit risk) remains to be seen. Interestingly, Global Bonds made small losses on the month, although much of this is explained by a strengthening Sterling, to further cloud the picture.

Finally, Emerging Markets (including Emerging Infrastructure) proved out of favour in May, despite wider risk assets generally nudging forwards. This has certainly been the trend of the past twelve months; negativity stemming from the China region was absorbed by global investors over the second half of 2015. This year Emerging Markets have been broadly keeping pace with their Developed Market counterparts, rising and falling at a faster rate depending on localised market direction. Until the Brexit issue is resolved, though, it is unlikely that markets will stabilise while many global decisions are still placed on hold pending further clarity. This is particularly the case when considering adding higher risk assets to portfolios at times of elevated short-term uncertainty. Therefore further volatility may follow until the dust settles.

Client Services Team Is Now Being Led By Louise Charrington

Fiducia Wealth Management Posted in Tax Planning on 02.06.16 Read Tax-free Dividend Allowance introduced a new system from April this year. The notional 10% tax credit on dividends has been...
Gain further insight to all things financial