Elsewhere, bonds, both conventional and index linked, delivered miserly returns that scarcely made it into positive territory. In the alternatives arena, property, infrastructure, private equity and absolute return all achieved healthy numbers, although commodities, on average, endured yet another quarter of hardship to compound the losses realised in Q2. 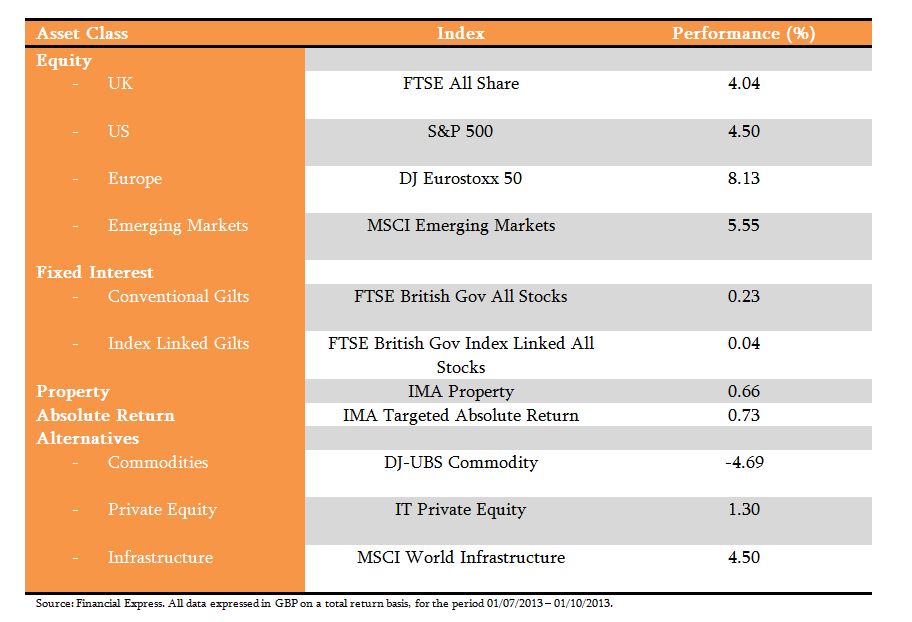 In July investors were buoyed by data from the corporate world seeming to suggest that quarter two earnings had met, or indeed exceeded, analyst expectations, a point that took on particular prominence within the financial sector as some banks recorded a 40% return on capital. The upbeat tone was fortified further by comments from the Chairman of the US Federal Reserve, Ben Bernanke, who echoed his previous rhetoric that QE tapering would not be initiated until unemployment fell below the 6.5% target rate, although it was noted that this would be kept under close scrutiny.

As markets progressed into August, the traditional summer lull in trading activity ensured market volume was significantly lower than usual. On the economic front, there were few new developments to pre-occupy investor mindsets, with the ongoing concerns in Europe continuing to remain firmly on the sidelines as German elections loomed. No further clarification was given with regard to the possible curtailment of US QE, despite growing conjecture that the Fed was, privately, giving greater consideration to stopping, or at least reducing, the printing presses. Such growing rumour triggered a slight normalisation in bond yields, in addition to a sell-off of emerging market currencies to the extent that locally denominated bonds in these emerging regions suffered heavy losses.

The initial attention in September centred on Asia, as early in the month China reported forecast-beating export figures and Japan posted second quarter GDP growth well in excess of even the most optimistic projections. The Asian revival boosted investor risk appetite, as did the significant news that came a little later in the month that the US Federal Reserve were maintaining asset purchases at $85 billion per month, surprising markets who had anticipated a slight reduction to around the $70 billion level. In light of Asian positivity and the maintenance of QE, it was of little surprise that major equity markets rallied, taking many to levels not seen for several months.

For the remainder of 2013, our outlook is one of cautious optimism although we are conscious of the risks that remain. Economic data from many developed nations is continuing to improve, overall, as are the fundamentals in emerging markets, irrespective of the recent sell off. Thus, there are grounds for a more bullish outlook. However, bond market normalisation could jeopardise sustained recovery if yields rise sharply, while the European situation, despite not making headline news, is still not resolved definitively. Although the US has signalled its intent to maintain asset purchases for the time being, there will come a point when it is no longer prepared to inject such large amounts of liquidity to prop up the system. When this stimulus-free environment commences, the exact impact that it will have is uncertain.

Fiducia Wealth Management Posted in Financial Advice, ISA's on 02.10.13 Read In this month’s Fund Manager Q&A we speak to the team from the highly successful Unicorn UK Income Fund. We find out about...
Gain further insight to all things financial

WHEN CAN YOU RETIRE? THE RETIREMENT PLANNING JOURNEY | Fiducia Wealth Management

WHERE SHOULD I INVEST MY MONEY AFTER COVID-19? Fiducia Wealth Management