Broadly speaking, equities ended the quarter in negative territory, although price appreciation was recorded in the US and Europe. Fixed interest instruments were down over the period, with index linked gilts under-performing their conventional counterparts. In the alternatives space, commodities continued their recent downward trajectory, ending the quarter over 8% down, whereas both infrastructure and absolute return managed to achieve small positive returns. 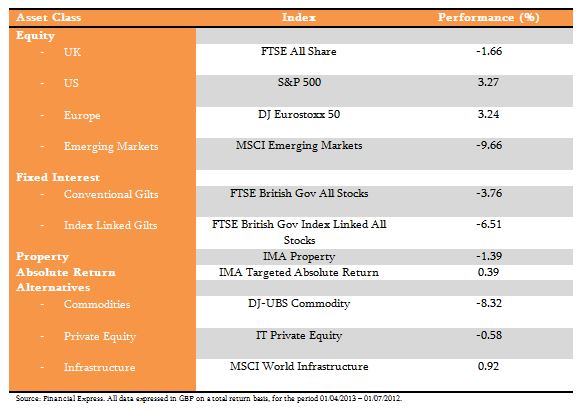 The start of April was initially characterised by the continuation of first quarter euphoria, evident in that at first risk assets sustained their healthy outperformance of defensive asset classes. However, the news mid month that Cyprus required urgent financial aid in order to remain solvent transmitted shockwaves throughout the system, bringing the underlying problems within the Eurozone, which had taken a back seat due to other developments, to the forefront of investor mindsets again. Part of the proposed remedy to help stave off Cypriot insolvency involved ordinary depositors giving up a large proportion of their savings, a proposition that was not only met with fierce protest but also set a significant precedent for any future Eurozone bailouts. Unsurprisingly, in light of Cypriot difficulties, investors flocked to safe havens which resulted in bonds, almost across the board, posting gains.

In May, the US dominated investor attention, but for two contrasting reasons. Early in the month improving economic data emanated from the world’s largest economy to boost sentiment, as unemployment appeared to be continuing along its recently formed downward trend and consumer confidence, a key determinant of US economic growth, displayed signs of attaining positive momentum. Progression through the month, however, brought with it increasing conjecture that the Federal Reserve was giving greater consideration to curtailing its large scale Quantitative Easing (QE) efforts, a development that materially upset investor mood as the real effects of suddenly stopping the printing presses was, and still is, relatively unknown. Doubts surrounding the future of QE sent bond and equity indices down, a level at which they remained for the remainder of the month. In Japan, the incessant monetary policy expansion continued to fuel market gains, although mid-May Japanese indices declined, in part because of the aforementioned QE fears and in part due to profit taking.

The final month of the quarter was, on the whole, a negative period. The concerns regarding the ending of QE continued to linger, with emerging market equities bearing the brunt of investor nervousness, although US, UK and European markets also suffered. The Asian region, and therefore Asian equities, endured a poor month, as concerns that Chinese growth may be starting to come under pressure had negative ramifications for nearby countries that benefit from the ‘China effect’. Equities aside, ‘bricks and mortar’ property in the UK enjoyed a rebound contrary to the performance of many other assets, as rent review increases signalled an improvement in underlying conditions both inside and, importantly, outside of London.

Looking ahead, our outlook for the coming quarter is one of cautious optimism although we are mindful of the risks that remain. From a positive viewpoint continued improvement in underlying economics in both the US and Japan are reasons to be cheerful, as is the scope available to emerging markets to initiate further stimulus should the need arise. However, alongside these positives there are risks that one needs to be conscious of. The Cypriot bailout occurrence is a timely reminder of the risks that are still inherent within the Eurozone bloc, while the ending of US QE would move markets into a stimulus-free environment for the first time since 2008. The latter point is of particular importance, as the impact of stopping QE is uncertain.

Fiducia Wealth Management Posted in Investing, Tax Planning on 02.07.13 Read The pro-equity stance that Fiducia adopted in the summer of 2012 was supported by a number of factors which occurred in the...
Next Post

Fiducia Wealth Management Posted in Financial Advice, ISA's on 02.07.13 Read In this instalment of Fiducia’s Fund Manager Q&A we quiz the Franklin Templeton global bond team about their methodology for...
Gain further insight to all things financial

WHEN CAN YOU RETIRE? THE RETIREMENT PLANNING JOURNEY | Fiducia Wealth Management

WHERE SHOULD I INVEST MY MONEY AFTER COVID-19? Fiducia Wealth Management