The third quarter of 2012 was broadly a positive affair, with risk assets outperforming their defensive counterparts. Equities posted healthy returns, with the US and European indices in particular gaining ground, while, within the alternatives space, commodities and private equity also benefited from a greater investor appetite for risk. Conventional gilts struggled throughout the quarter, only posting modest gains, index linked gilts lost over 2.5%, while property also lagged equities. 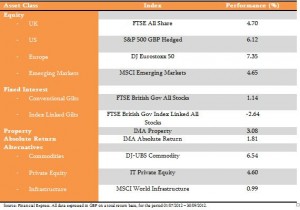 Sentiment was the subject of competing forces during Q3, with expansionary monetary policy announced by a raft of developed world central banks up against deepening concerns within the Eurozone. At the start of July the Bank of England increased its asset purchasing program by £50 billion to take total QE to date to £375 billion, in an effort to not only kick start growth but to also try and limit the adverse impact that a slowdown in the Eurozone, a key trading partner of the UK, would have on an already fragile economic picture. China also suffered, with stark declines in its Producer Price Index (PPI) indicating a cooling economic environment, while Brazil cut its interest rate for the eighth time in the past twelve months to try and stimulate growth. August was a relatively quiet month, with market trade around a third of the volume seen in August 2011, although, of course, this is somewhat of a skewed base figure given the turbulence seen during August last year. Towards the end of the month, however, it emerged that several Spanish regions, namely Valencia, Andalusia, Mercia and Catalonia, indicated that in the very near future they would require billions of Euros in financial aid from Madrid, news which heightened risk aversion, sending markets lower as a consequence.

In early September, Mario Draghi, the president of the European Central Bank (ECB) triggered investor euphoria by announcing that the ECB would do ‘whatever it takes’ to solve the European debt crisis, bringing the risk-on trade to the forefront of many investor mindsets and catapulting equity markets several percentage points higher. Eight days later Ben Bernanke, the Chairman of the Federal Reserve in the US, announced an unprecedented quantitative easing package, in which an open-ended, $40 billion per month asset purchasing program will be implemented. Such is the scale of this, it has the potential to be larger than QE1 and QE2 – prior stimulus packages – combined. Unsurprisingly, this further added to equity market rallies.

In terms of our outlook for quarter four, we believe equity markets will trade sideways to down with rallies not being sustained. Although equity markets have enjoyed a relatively healthy quarter three, this was largely fuelled by central bank intervention, not by improvements in underlying fundamentals. Real economic indicators, such as trade data, are yet to bottom out, while potential conflict between Israel and Iran, and the associated consequences for the oil price, is another cause for concern as the ramifications this could have are significant. Spain appears to be in an increasingly desperate financial predicament, and it is looking all the more likely that it will have to formally request a bailout from the ECB. If such an outcome materialises, investors will undoubtedly rush to perceived safe-haven assets such as government bonds, with equities falling as a result. We therefore feel risks are likely to remain on the downside, and as such believe there is insufficient justification to add to risk. Thus, in the near future we do not expect to depart from the asset protection mode our portfolios have been in for some time, which is characterised by defensive equity holdings, a well diversified absolute return weighting that possesses lower correlation to other assets, and a higher cash allocation.

Fiducia Wealth Management Posted in Investing, Tax Planning on 15.10.12 Read Our latest Webcast has been released, where Michael Hughes CBE talks frankly about the US QE situation, his views on the...
Gain further insight to all things financial