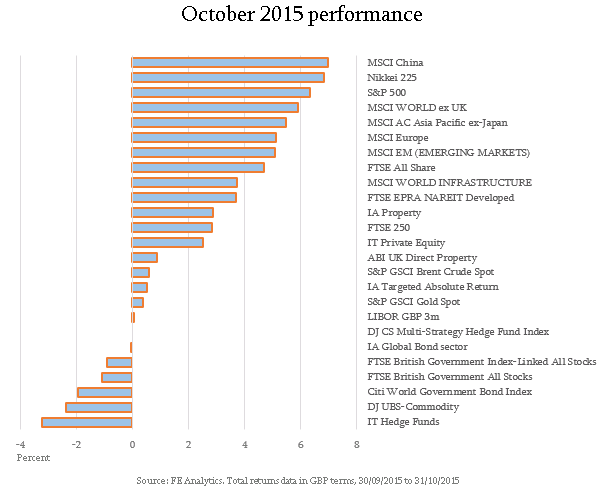 Asset prices rebounded in October, catching many hedge funds who had taken bearish positions off guard. Following the pessimism of August, and the subsequent stabilisation of markets in September, October proved to be a more positive month for investment portfolios as a fair chunk of recent losses were clawed back. Stock markets led the charge for financial assets, with China and Japan in particular performing well, having previously seen their markets sell down more than most in the midst of the summer drama. The announcement in the second half of the month that the European Central Bank would extend its bond-buying programme (more commonly known as quantitative easing or QE) also helped to reduce nervousness in the market place, leading stocks to rally.

Taking a closer look at the performance graph above, we see that the first eight categories of best performing financial assets during October all represent global stock markets.

Of these, the first seven stock markets each returned a hefty 5% or more over the month, highlighting two points: first, that stock markets can often rebound quickly and substantially en masse after witnessing significant price corrections; and second, that being out of the market after market falls can prove costly (not least for those selling in response to market panic). For these reasons, we remind investors that it is a dangerous exercise to try to “time” the market; instead, an appropriately diversified portfolio, designed with a long-term time horizon in mind, presents the greatest chance of attractive returns over an extended time horizon.

Outside of the dash for stocks, Infrastructure assets were the next highly ranked investment category, taking 9th place on the board. Property assets followed closely; investors remain keen to gather exposure to bricks and mortar, not least in response to a volatile financial market backdrop and continued low rates of interest. For these reasons, in addition to performing well over the past month, the UK Commercial Property sector has offered the highest returns of all asset classes during 2015 as a whole and also since markets started turning down in April.

At the other end of the table, each of the four Fixed Income asset class categories took positions near the foot of the table during October, suggesting investors are once again keen to offload their bonds when faced with a slightly increased appetite for risk. During 2015 as a whole, Fixed Income assets on aggregate have broadly offered nil returns.

Commodity prices have still not fully stabilised yet, despite significant price falls over the past eighteen months. An imbalance between industry supply and demand continues to infer further price adjustment, although signs of market stabilisation are beginning to emerge, providing some much needed light at the end of the tunnel for Commodity investments.

Fiducia Wealth Management Posted in Investing on 06.11.15 Read In the past, income-generating strategies were largely restricted to cash and fixed income so that, to a large extent,...
Next Post