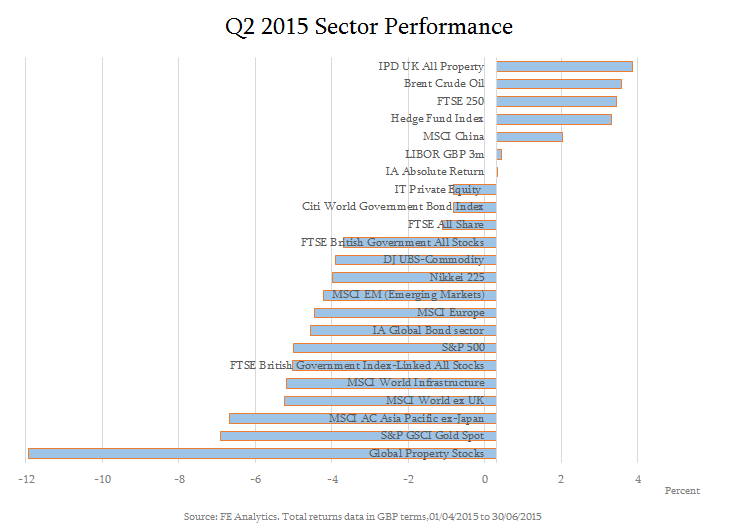 Markets broadly continued on the positive trajectory of 2015 for much of this quarter, though stuttered in the final weeks. Domestically, the UK General Election brought an unexpected victory for the Conservative Party. This result is generally perceived to be the most business-friendly outcome and gave the FTSE confidence in continuing to hover around record highs. This confidence also aided the strengthening of Sterling against several key currencies. This includes the US Dollar, which has been appreciating since last year in response to encouraging economic data. However, recent US data has been mixed in its nature, including confirmation of sluggish productivity. As a result, expectations of the first interest rate rise have been pushed back from the third quarter of 2015, with the IMF suggesting the Fed should wait until 2016. The Yen and Euro have also depreciated against Sterling as supportive monetary policy weakened the currencies, which in time could improve the growth prospects of these regions. Despite the positive central bank action in both Japan and Europe improving the long-term outlook, the possibility of a Grexit from the Eurozone has caused a thorn in the side of global markets throughout much of June. After tough negotiations between the Greek Prime Minister, Alexis Tsipras, and the European Union, a compromise looked to be on the cards. However, discussions since stalled over Tsipras’ objection to the level of austerity demands as part of the deal, resulting in the ECB freezing funding to Greek banks. Away from equity markets, sentiment continued to worsen towards the bond market. A spike in yields had been a very noticeable occurrence throughout the quarter, resulting in a fall of up to 5% in the capital value of the global bonds sector. We have held an underweight position relative to peers towards Fixed Interest for some time in view of a bleak outlook for the asset class. During the quarter we also reduced our allocation towards property stocks over concerns of full valuations. This decision was since justified as the asset class became one of the biggest casualties over the period with one relevant index falling over 12%. Our favourable position towards hedge funds and bricks and mortar property were also rewarded. The benefits of low correlation and ability to circumnavigate equity risk have resulted in positive returns for these asset classes throughout the quarter, despite the erratic month of June.

Whilst events in Greece have unquestionably created short-term fear in global markets, we feel this will be somewhat containable. Greece accounts for less than 2% of Eurozone GDP and the ECB is in a position to do whatever it takes to support the other European periphery countries. Though despite this, these kind of events, which could be considered temporary shocks, serve to emphasise our ethos of asset class diversification. Until monetary policy becomes clearer in several key regions, we expect the continuation of short-term volatility. In these market conditions, alternative assets such as property, hedge funds and absolute returns can prove to be highly important in providing a portfolio with defensive characteristics and cushion capital value loss. This is especially pertinent in an environment with prevalent risks in both equity and fixed interest markets. With stretched capital values, poor liquidity and interest rate normalisation all culminating in bond market risk, we will continue to favour alternative assets. The timing of the first interest rate rises continues to be a highly debated topic and will be heavily dependent on the strength of UK and US economic data. Wage growth is looking strong in certain service sectors in the UK, however we are still mindful of the issues surrounding poor productivity growth. As a result, though it would not be inconceivable for UK interest rates to unconventionally be raised before the US, it would appear most likely this would not occur until 2016. An increasingly prominent theme we expect to witness throughout 2015 and in subsequent years is for a growing divergence between asset classes. With QE largely responsible for the distortion of asset values, investors have not been justifiably compensated for risk as would previously have been the case. We expect a more favourable investment structure going forward, whereby growth assets such as equities should achieve higher returns than traditionally defensive assets such as bonds and property.

Fiducia Wealth Management Posted in Financial Advice on 02.07.15 Read We were shortlisted in four of the Money Marketing Award categories in this our 10th anniversary year, which is the most we...
Next Post

Gordon Kearney, Managing Director & Financial Adviser Posted in Financial Advice on 02.07.15 Read It was predicted after the first Budget earlier this year that there would be a second one following the general election.
Gain further insight to all things financial