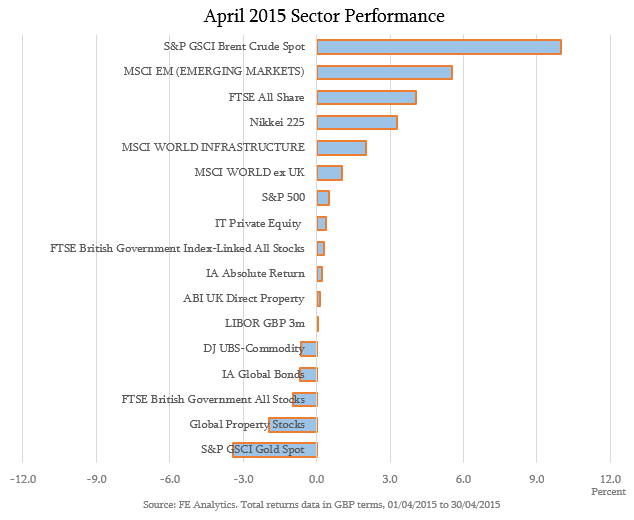 Oil prices have been the main beneficiary in April, with Brent Crude spot rising 10% to a 2015 peak. This has been driven by expectations of reduced supply, which in turn is on the back of two main causes. Firstly, the predicted shakeout of US shale producers from low oil price levels following the lack of intervention from OPEC is beginning to take shape; BP, Shell and Exxon have all announced reduced profits for the year and as a result are reducing capital expenditure. Secondly, the ongoing conflict in Yemen is creating nervousness relating to the commodity’s transportation, with the region on key routes for the movement of oil from Gulf producers. However, the oil price may soon meet a ceiling with an additional half a million barrels per day set to come on stream from Iran, which could counteract supply shortage fears.

Emerging Markets prospered after a few months of flat performance, with the trend primarily driven by the BRIC nations. Despite weak export figures and witnessing manufacturing data fall to a one-year low, the China index was the most impressive, with suggestions the weak data could lead to further economic stimulus. India should also benefit from its own stimulus package, with the near-term growth rate expected to soon surpass that of China. In the short term, however, the index lagged the rest of the BRIC constituents on valuation concerns. Riots escalated in Brazil following developments in the Petrobas scandal, arguably one of the biggest examples of financial corruption in the nation’s history. Encouragingly, markets reflected the long-term view that these events may add extra impetus to the demand for much-needed reforms. At Fiducia, we continue to have a favourable outlook for Emerging Markets due to attractive valuations and long-term growth prospects, which are currently being aided by major reforms in several regions.

The FTSE 100 continued to reach new heights, rising above 7,100, in spite of the upcoming General Election. Broad sentiment suggests no real concern over the long-term outcome, with a Labour minority currently looking the most likely of the scenarios. With a minority government or coalition expected, major reforms seem unlikely to pass due to greater barriers to policy approval than with a majority government.

The Nikkei 225 rose above 20,000 for the first time in fifteen years, indicating a continued positive response to Japanese reforms. The latest rally came on the back of the region recording a trade surplus. The weakened Yen was a primary cause for this positive news, with a currency depreciation one of the objectives of the Abenomics programme with the use of Quantitative Easing.

The broad rise of equity markets across both developed and emerging countries suggests a ‘risk-on’ environment. This is reflected in the reduction in gold spot price, with this perceived ‘safe-haven’ appearing less essential in current market conditions. Our current views reflect this sentiment, with our allocation to global equities, particularly funds that are sensitive to the economic cycle, increasing across the board in the past month.

Fiducia Wealth Management Posted in Fiducia News, Awards on 05.05.15 Read In the past week or so we have been able to complete a reorganisation that was planned at the beginning of the year.
Next Post